A big thank you to Ruth who volunteered for a morning of cleaning in the bakery. She always wanted to contribute to the bread circle and we thought this would be good to do. Believe me it was! Not that it is very visible so I thought I make sure that there is evidence to prove that this is not fake news. If you look at the pictures of the wall before and after the cleaning commenced you should be impressed. However, it was very clear that this is a potentially endless job, and we barely scratched the surface despite working hard for several hours in various areas. However, it is the ‘invisible’ areas that get neglected in the weekly routine clean so it does need actions like this from time to time. Ruth estimates that it will take 3 days to properly clean the whole operation throughout!

Generally we in the breadcircle are very lucky because we manage a lot of work with just volunteering, nothing else. I am always impressed and sometimes overwhelmed by the amount of good-will. We probably could do with one or more bakers in the system, and if there are other people who are keen cleaners let the bread doctor know! 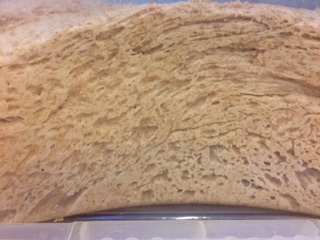 Today’s loaf is out of the regular cycle of bread varieties: it is made from finely ground flour from the Tide Mill in Suffolk (woodbridgetidemill.org.uk)that was discovered by one of our members. The miller’s daughter works in Merseyside and brought us two bags of flour, and you are getting them in today’s bread. The miller has very expressly asked for some feedback. So let us have it please! The wheat is grown near the Mill and is from organic English heritage varieties, landraces that cannot be labelled under current rules as they are not pure genetically but consist of a mix of seeds kept back by the farmer for next year from the last harvest. It was an easy dough to make and to work with and looked very good when we got it out of the fridge (see picture). Starter by Lesley, dough mix by Claire and Debbie, and shape and bake by Angela, Pete L and Pete W, with contributions from Michael. The only thing we struggled with today were the scales until we discovered that they were broken and needed replacing. Enjoy your loaf. Greetings from the bakery team. 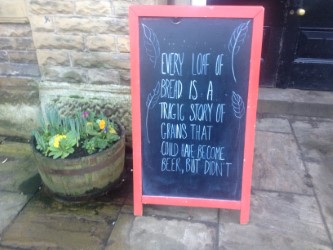 Bakery Bits have published an excellent recipe for a quick loaf on their website. It is not a sourdough loaf, and is made with a yeast poolish. A ‘poolish’ is a way of being economically with yeast. Ideally you go to the local Tesco bakery and ask for a free bit of fresh yeast and use that sparingly. They usually give you plenty for what you need. The word has entered the English language via France because the French used immigrant labour for their bakeries (a good bakery to this day makes fresh bread three times a day there) and it was the Poles who brought the method to Paris. That was in the 1800s.  So this is a very liquid dough, no kneeding required, mnimal time but a bt of organisation. The recipe is also very adaptabe and if you do not have their particular clay form or donot want to buy it (expensive) just prove the bread in a bread tin with a cloth over it and put it in the oven when ready. Here is the lnk to the recipe:

I thought I share the link to one of the more recent publications on glyphosate (or more commonly known as ‘Roundup’) the most commonly used weed killer, produced and patented by Monsanto. It should speak for itself. To my mind it strengthens the EU stance that glyphosate should be banned until further research very specifically shows that it is not harmful. This is what I would call the cautious approach – make sure it does no harm before using it widely. At the moment the discussion in the UK seems to be veering toward licensing it after Brexit. I would be interested in your opinions on the matter. The Soil Association has been fighting for banning it. And there seems to be ample evidence that glysphosate levels in regular flour are fairly high, certainly frequently above the levels used on rats in this study:

I have checked with Walk Mill (one of our main suppliers) and they are not using it for their seeds – farmers use glyphosate-treated seeds that then eliminate the weeds at the same time as the young shoots of the wheat grow. On that basis we have held back from getting the flour tested so far, also because it is quite expensive at between £125-170 each test sample. Shipton Mill (our other main supplier) say they do not need to test because their flours are mostly organic. So we are not planning any further action on that front. However, I would be interested to hear if anyone has any opinion on the matter, especially regarding the above study.
Greetings,
Michael.