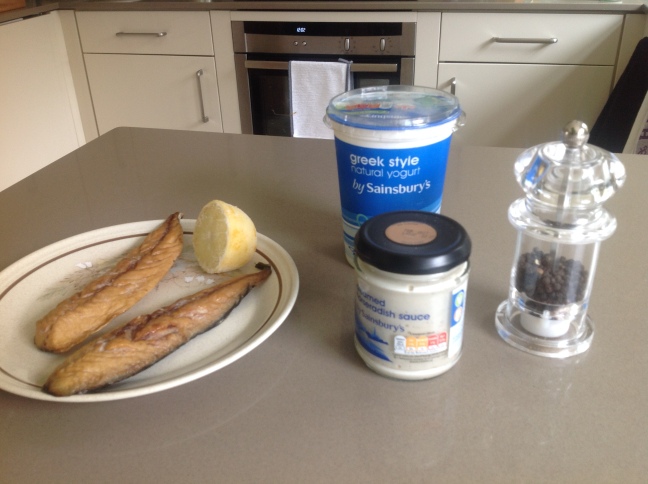 French bread slices, toasted (optional), to serve ½ cucumber, sliced, to garnish (optional)
METHOD
1. Peel and flake the mackerel, being careful to remove any bones. 2. Mash the fish with a fork, stir in the horseradish sauce, crème fraîche and lemon juice. Check the flavour, the quantity of horse radish sauce may need adjusting depending on its strength. 3. Chill in the fridge for an hour or so before serving on buttered toast or bread.  4. The best garnish for this pâté is cucumber, without doubt – I’ve used fresh, but you could also try pickled cucumber.

This is a picture from Charles Tait on the Orkneys where Birdhouse Mill is grinding Bere meal from Bere – an ancient form of Barley. Tastes delicious if you like bannock. 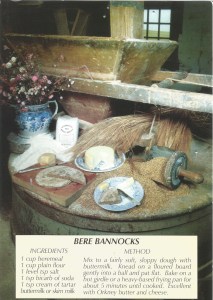 This story was apparently told in a concentration camp. Stories helped some of the inmates survive the unbearable suffering and lose themselves, if only for a moment. This one, about bread, is worth recounting to the bread circle, though is better told than read.

Leila had a bakery. The smells of almond, cinnamon, flour, sugar, could be smelt throughout the village and there were always queues outside her shop every morning. Children would be late for school, parents late for work and people already at work would find themselves sneaking off to get some rolls or pastries from her shop. ‘2 almond buns’ said a child. ‘Ah two – let me see. Oh yes, I just about have two left’ she would say. One day, she overheard two old men at the end of the queue saying ‘Have you noticed that Leila always has just the amount that people are asking for and no more and never any leftover?  How does she do that? Is she possibly a witch?’  Leila carried on selling her cakes and breads and pastries but at the end of the morning, she packed up her things, emptied the counter, locked up her shop and left with a small bag of her possessions. She went to the harbour and there in the dock was a small green and silver boat. In she climbed and immediately the anchor was pulled up behind her and the boat set sail.

Over seven seas, through seven days and nights, it sailed until it pulled into the harbour of a small town and Leila disembarked. It was a city on a hill, with smaller houses at the bottom of the hill, getting bigger towards the top where the rich people lived. Leila began to look about for where she could set up her bakery but she heard a sound of someone crying. It was a loud distressing wail and she felt drawn towards it to see if she could help in any way. She got to the house, no bigger than a wardrobe, there at the door was a skinny starving dog and the cries came from inside. She asked what was wrong and a lady in rags came to the door. ‘ Cant you see? We have no money, no food and we’re all starving. I already have 6 children who don’t get enough food and I’ve just found out I’m pregnant. What are we to do?’ She carried on wailing. Leila said ‘I’m so sorry. I’d love to help but I don’t know how. I can only give you my blessing’ ‘Thankyou’ said the lady and Leila went on her way. As she got nearer to the top of the hill, where the houses where much bigger and wealthier, she again heard cries of distress and was drawn to where they were coming from. She found the Sultana in her palace, sitting and crying. ‘What is wrong?’ asked Leila. ‘Surely you have enough food and clothes?” “I do,’ said the lady ” but I’m so worried. I’ve been married now a few years and not borne my husband, the Sultan, a child. I fear he will kill me and I don’t know what to do’. ‘Maybe I can help’ said Leila ‘but it’ll take a bit of time. Firstly, give me one of your skirts.’ The Sultana did, not knowing ta all how this strange woman could help her but feeling quite desperate. Leila began sewing a patch into the skirt to make the waist a little thicker.  She then turned to the lady-in-waiting and said ‘Now go and tell the master that his wife is pregnant.”

Then Leila asked if she could set up her bakery in the Sultanas kitchen. Wonderful smells of bread baking soon began wafting out of the house and immediately there were queues of people – soldiers, servants, rich men and women, all queuing up to eat her delicious breads and cakes. It happened that each day just as she had finished baking, she would hear the yapping of a small dog and there at the gates was the dog belonging to the poor starving family she had seen when she first arrived. Each day she would give him a bit of bread to eat, even if she had none left for herself. And every few weeks she would take the Sultana’s skirt and fill the padding out a bit more. After a few months, the Sultana was looking as if she was several months pregnant but she was worried as she knew she still was not pregnant and that the Sultan would be sure to find out soon. ‘No fears’ said Leila but the Sultana was getting more and more worried especially as after 9 months, Leila said to the lady-in-waiting ‘You can tell your master that his wife is soon to give birth’. ‘What do you mean?  said the Sultana. ‘Get the shawl you have made for the baby’ said Leila to the servant. ‘I have made an especially big batch of gingerbread today and one is shaped as a baby’. ‘Oh no’ said the Sultana ‘but my husband will realise it is not a real baby.’ Leila was calm ‘You can tell your master that the baby is here’ she said to the servant.

As the gingerbread baby was wrapped in a shawl, the Sultan approached. At the same time, Leila opened the gate to the yapping dog who rushed in and as the Sultan was about to be handed the baby, the dog jumped up and grabbed the whole gingerbread baby in its shawl and ran off. ‘The dog has stolen my baby’ shouted the Sultan and everyone in the Palace screamed and made chase. Leila knew that the little dog, loyal as it was, would take the food home to its family to share it with the others so she quickly went down the hill to the small house and saw that yes, the dog was there. She knocked and went in and asked the lady whether she had indeed had her baby. ‘Yes,’ cried the woman ‘and I don’t know how we’ll cope’. ‘Would you like your baby to have a good  chance in life with enough food and clothes and love?’ ‘Of course but how could that happen?’ ‘Quick’ said Leila. ‘Wrap him in that shawl that the gingerbread was in’. She did and as she was holding her baby in the shawl, in came the soldiers with their guns. As they entered Leila said ‘See, this woman has just rescued the baby from the mouth of the dog!’. The woman looked at Leila in amazement. Leila put her finger to her lips and gave a wink.

With relief, the soldiers took the baby and handed him to the Sultan, with the Sultana looking on amazed. Leila gave a wink and put her finger to her lips. The Sultan was delighted and gave a generous gift to the woman for ‘saving’ his son together with a promise that should she ever need more she only would have to approach him for it. This put her family out of grinding poverty forever.

With her work completed, Leila packed up her possessions and walked down to the shore where a green and silver boat awaited. As she stepped in ,the anchor was pulled up behind her and the boat set sail -through seven seas and over seven days and nights it sailed, pulling up in a small village, where Leila reckoned there was a whole village starved of good bread and cakes. She opened her shop the next morning and the villagers immediately smelled the familiar and much missed smell of baking bread and cakes. Instantly there was a long queue and no-one ever mentioned the word ‘witch’ ever again.

Julia, courtesy of Claire Murphy who told this story about Robert Desnos, a surrealist poet who told stories when imprisoned in Theresienstadt.

We had another morning, today,  of baking sangak which worked very well and tasted delicious. Michael had bought stones from a garden centre of the right shape and size and our first batch from last time were sent back to the garden drive. The new ones were washed in the dishwasher and heated in the bread oven to a temperature of about 250 – 300. They were then ironed with the soap sent by Mojgans dad and the very wet dough (made the night before by Michael) was shimmied on to a very wet peel. This was then slid off the peel on to the hot stones in the oven (in an artistic fashion) and left in the oven for about 7-10 minutes. The crispy thin sangak then was taken out of the oven, any remaining stones peeled off  and the bread was hung up on a nail until we were ready to eat. The first one did not have enough salt in the dough so that was adjusted. Sesame seeds were also sprinkled on some before the dough went on the peel.

Meanwhile, we – the team of Phil, Claire, Debbie, Michael & I – prepared a salad of fresh dill, coriander, basil, tarragon, parsley, watercress & rocket – in Iranian style i.e by peeling off the leaves and arranging them neatly! We made rose radishes and cut up the feta cheese.

We then had a gorgeous feast – with a wonderful cucumber and melon drink made by Claire. This is simply whizzed together cucumber and melon until it tastes right (about half and half), served with a spoonful of yoghurt and sprinkled with fennel or anise seeds on top of each glass. Debbie had made cauliflower florets, roasted with oregano and smoked paprika, salt and celery salt. We also had yogurt with olive oil and paprika; Moroccan hummus; chicken tikka bites. Everything tasted delicious with the sangak.

Back Story
Sliced bread is, of course, the benchmark for all good things. But it wouldn’t exist quite as we know it without Otto Frederick Rohwedder, a jeweler born on this day in 1880. His bread slicer produced the first package of machine-cut and wrapped bread 48 years later, on his birthday in 1928.
Bakers didn’t love the first version of Mr. Rohwedder’s invention, which he started working on in 1912. They feared the individual slices would quickly go stale. Mr. Rohwedder tried to ward that off by holding the loaves together with sterilized hairpins, but the pins kept falling out.
Finally, he added a step that automatically wrapped the bread, too. Eventually Wonder Bread bought a version of the machine.
Sliced bread was banned very briefly in 1943, to wide chagrin. The move was intended to control bread prices and save on wax paper during World War II. Headlines heralded the lifting of the two-month ban: “Housewives’ Thumbs Safe Again,” read one.
It wasn’t just housewives, though. In 1963, reporters noticed a Band-Aid on President John F. Kennedy’s finger and asked him what had happened.
Mr. Kennedy laughed and replied: “I cut my finger when I was cutting bread, unbelievable as it may sound.”